Our Purpose and Supporting Principles 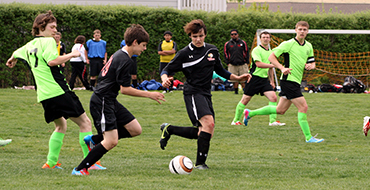 Teams are competitive in nature and striving to win is a necessary component of the program.

However equally important is the development of its players.  There is a broad range of talent, motivation and skill among players and they develop at different rates and at different times in their lives. This year's substitute can well become the team's star player of the future.

The coach is the individual primarily responsible for achieving these goals and is therefore, vested with the ultimate authority to make decisions about playing time. Parents and players must defer to the judgment of the coach but the coach shall be answerable to the HLU Board.

To assist the coach in allocating playing time, the following general guidelines are provided. They are also intended to help the parents and players maintain reasonable expectation about playing time.

HLU recognizes that granting or limiting playing time plays a vital role in team discipline and player motivation. A coach is specifically authorized to withhold playing time from a player due to player effort at practice, overall attitude or other disciplinary matters. However, if the coach chooses to limit playing time for a disciplinary or motivation reason, the coach should advise the player of their intent to do so BEFORE implementing the measure and it should not be used in a manner that humiliates the player. This device is a positive measure designed to improve performance and should not be used as punishment for punishment's sake.

Every player has the right to be treated with respect. Coaches should avoid actions or comments that publicly degrade or humiliate players. Every player should be made to feel that they are a needed and valuable part of the team. Coaches should strive to bring the level of play of all players up to a level where they are each a positive, contributing member of the team. This can be accomplished by a combination of practice and competitive playing time.

Every coach has the right to be treated with respect by players and parents. Players and parents should avoid actions or comments that publicly degrade or humiliate coaches. Each player should strive to be a contributing member of the team. That may mean that the player will not be playing in the position he or she desires.  Coaches should utilize the skills of each player in the position that best contributes to a team effort and should consider the wishes of the player in doing so. However, the coach retains the ultimate discretion in deciding where the player is best suited to contribute to the overall team effort. The player and parents must accept this decision as one that is in the best interests of the team as a whole.

Meaningful playing time does not mean all players must play an equal amount. It means that each player should expect to play enough and in a variety of circumstances that they have an opportunity to make a positive contribution to their team. In some critical games (such as loser out games at tournaments) or during crucial times in the game, the coach has full discretion and may choose not to play all players. During the regular season, the coach should strive to enhance the playing time of players who will be spending more time on the sidelines during the crucial times.

The challenge is to work all players into the game in a manner that the competitiveness of the team is not significantly diminished while allowing each player to contribute. Moving a more skilled player into a position to assist a less skilled player protects the competitive level while enhancing participation.

Meaningful playing time does not mean playing in the position of the player's choosing; nor does every player have the right or expectation that he or she will play in a starting position. The player must defer to the judgment of the coach and the coach must exercise that judgment in the best interests of the team.

EXAMPLES of less than meaningful play include:

HLU strongly encourages its coaches to have frank, direct and specific discussions with players and parents prior to the season as to how the coach intends to deal with playing time. It further encourages players and their families to appropriately voice their concerns to their coach during the season. Families should be assured that the coach will not punish or retaliate against the player because the parent has complained about playing time.